We are very happy to announce our next online seminar: the Virtual Seminar on AI (#vsai2022) will be held on the 22nd April 2022, from 10am to 12:30. The event is free but registration is required, please check our dedicated event page to register.

We are pleased to introduce the following speakers:

Guillaume Berthon received his MSc from the Ecole Nationale Supérieure de Chimie de Montpellier (France) and University of Texas at Austin (USA). He pursued a PhD at the Univeristy of Louvain-la-Neuve (Belgium) in the group of Prof. Istvan Marko (2002-2007), followed by a Postdoctoral contract at the University of Amsterdam in the group of Prof. Joost N. H. Reek (2007-2009). In 2010, Guillaume joined Syngenta Crop Protection AG (Switzerland). In 2021, he moved to Syngenta Japan, and is now Digital Synthesis Transformation Leader.

Samuel Genheden leads the Deep Chemistry team in Discovery Sciences, AstraZeneca R&D. He received his PhD in theoretical chemistry from Lund University in 2012, having studied computational methods to estimate ligand-binding affinities. He continued with postdocs at the Universities of Southampton and Gothenburg, where he simulated membrane phenomena using multiscale approaches. He joined the Molecular AI department at AstraZeneca in 2020 and has since then been the lead-developer and researcher on the AiZynth platform for AI-assisted retrosynthesis planning. His interests lie in studying chemical and biological systems with computers and using these approaches to impact drug development. He is a keen advocate for open-source software. 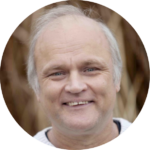 Per-Ola Norrbyobtained his PhD in Organic Chemistry from KTH, Stockholm (1992). After postdoctoral work in San Diego and Copenhagen, he continued an academic career in Denmark. He moved back to Sweden in 2006 to become a Professor at Gothenburg University. In 2014, he accepted a position at AstraZeneca Gothenburg where he is currently active as a Principal Scientist in Data Science & Modelling, Pharmaceutical Sciences. His research interests include the study of reaction mechanisms, molecular modeling, and reaction selectivity predictions.

Robert Pollice received his MSc in Technical Chemistry from TU Wien in 2015. During that time, he developed C-H activation reactions and investigated their reaction mechanisms under the supervision of Prof. Michael Schnürch. Subsequently, he started his PhD at ETH Zurich in the laboratory of Prof. Peter Chen to study London dispersion in molecular systems both computationally and experimentally. After graduating in 2019, he started as a postdoctoral fellow in the Matter Lab of Prof. Aspuru-Guzik where he is currently working on the use of high-throughput virtual screening, machine learning and lab automation to design organic electronic materials and molecular catalysts.

When you visit any web site, it may store or retrieve information on your browser, mostly in the form of cookies. Control your personal Cookie Services here.

Necessary Analytics
These cookies are necessary for the website to function and cannot be switched off in our systems.
Technical Cookies
In order to use this website we use the following technically required cookies
These cookies allow us to count visits and traffic sources, so we can measure and improve the performance of our site.
Google Analytics
We track anonymized user information to improve our website.
Decline all Services
Accept all Services